Nikon has just officially announced the Nikon D4s, the company's latest flagship DSLR which offers increased speed and improved performance compared to its predecessor, the D4. This professional-grade FX-format DSLR is built for the most demanding of photographers.

The hardware of the D4s is very similar to that of the D4: in fact, the D4s's body is nearly identical to that of the D4 with the exception of a few minor ergonomic improvements on the back of the camera. The D4s also has the same 16.2-megapixel sensor resolution. What has changed is the processor that lies at the heart of the camera: the D4s features Nikon's latest EXPEED 4 chip, which is up to 30% faster than the EXPEED 3. This leads to some very exciting enhancements which we discuss below. 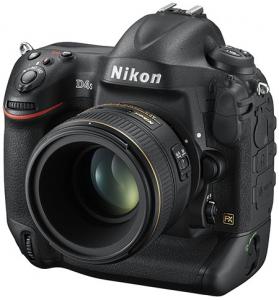 And with the D4s, Nikon is setting another industry first: the camera's maximum expanded sensitivity has been increased to the equivalent of ISO 409,600 (Hi 4), higher than what any other DSLR currently available offers.

Another important addition is a new "Small" RAW size, featuring 12-bit compressed files. In this mode, the camera can store almost as may RAW files in its continuous buffer as it can JPEGs (176 S RAW files vs 200 fine JPEGs).

The last key addition was made to the D4s's autofocus system. It features a new Group Area AF mode in which 5 AF sensors can be used as a group, which may be beneficial in certain shooting situations. The camera still uses the same 51-point Multi-CAM 3500FX sensor with sensitivity down to -2 EV and 15 cross-type points. The 91,000-pixel metering sensor also remains the same. Other enhancements include settings additions to the menu, mainly while in live view and video mode. The list below summarizes all of the changes between the D4 and the D4s as stated by Nikon:

Image CaptureMetering and AFVideoHandling and PerformanceThe launch price of the D4s will be $6499.95 in the US, which means that its extra speed comes at a $500 premium over the D4.

While it's still too early for the D4 (launched exactly 2 years ago) to start showing its age, we are happy to see that Nikon has decided to facelift its flagship in a timely manner and bring it up to speed with today's ever-evolving technology. Frequent users of live view and video will surely appreciate the enhancements that have been made to the D4s in that area, and we also can't complain about the 11FPS framerate for stills and the longer battery life. With its expanded sensitivity, the D4s may also turn out to be the best low-light camera out there.

The full specifications for the D4s can be viewed in our camera database. The camera is expected to ship within 2 weeks.

I expect it will be worth the additional $500.  I'm just not sure if it is enough of a difference to cause the pros to upgrade.  The latter is what I am hoping for so that we see a good number D4 bodies on the used market at a good price.  Oh well, time will tell!

They're just so damn big!

I expect it will be worth the additional $500.  I'm just not sure if it is enough of a difference to cause the pros to upgrade.  The latter is what I am hoping for so that we see a good number D4 bodies on the used market at a good price.  Oh well, time will tell!

They're just so damn big!

Not any bigger than if you attached a battery grip to any other Nikon, really.

Not any bigger than if you attached a battery grip to any other Nikon, really.

Yeah I don't do that either.

I have grips on all my bodies...it feels more comfortable to me...plus it gives me the vertical shutter release and, most importantly, the extra battery, doubling my shooting capabilities.  That is extremely important during the spring when I'm working full time and shooting games several nights a week.

Feb 28 2014 05:34 AM
I have the Chinese versions on both my bodies. I like the handiness of them, and the extra battery power, but if you run AA batteries you will find that they don't last as long as the Nikon rechargeable pack.

Also, the dials don't always work very well on the Chinese knock-off, but then you get what you pay for, right?

I have the Nikon version which uses the same battery as the Nikon or AA.  With my "normal" shooting routine, I have never had to use AA batteries.  That said, in critical or extended shooting assignments, I usually have sufficient AA batteries and the carrier for them in case I do need extra power.