I belong to a FaceBook photo group and they periodically have a monthly theme. This month it's dark/moody.

I attempted a moody, self portrait with minimal lighting.

This is lit with an SB900 (set to 1/16th power), upper camera left, fired into a reflective umbrella using Nikon's CLS.

Edited in PhotoShop CS6 and made monochrome with a B/W filter. 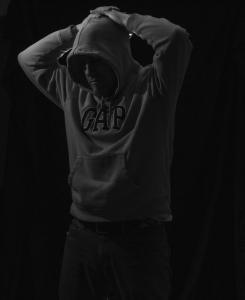 As usual the images are great!

Admittedly the spider silhouette was one of my top 3, and so it is unfortunate, might I say surprising, that it didn't make the cut.

Sounds like best shot!! I already rack my brain to produce a FlickrFriday and MacroMonday for two Flickr groups. I like the challenge of the themes, but I also like the restriction of having to go through the images you produce in a week and choose your fav. Maybe some of those would make the cut.

Can I add that it's sometimes nice to see EXIF data and lighting info for shots. Particularly if you're new to the camera scene. I have no trouble sharing shot data, but I know that others may not feel the same. I think there's a minimum of info shared with each image, but it might be nice to add as much as you can.

Very happy to be placed runner up and I thank you for your votes, I do hope that in future competitions there will be no nonsense with people voting for their own photos thousands of times like they did on this competition.

When I viewed the images yesterday there were very few votes for each image. Admittedly I voted for my image (once), but also the other runners up as well as one of the spider macros (#5). I wish I could still see the votes as I think there were 16 for my image...

Edit: I just found the voting page and I don't see 1000's of votes for anyone. Would be interested in knowing how you're coming to your conclusion regarding the voting process.

Wow!! I was very happy to make the final group, but am incredibly appreciative of winning the month's competition. There were a number of incredible images!!