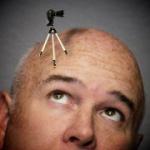 etphoto hasn't added any friends yet.

I like these a lot. My biggest pet peeve with stuff lime this are shadows. I see none, well done.

They'll work. If possible, borrow a lens and use it for a bit before buying. Of course, if you know someone that has one.

I heard something funny the other day and sure enough it's true. At base ISO the D3400 has more dynamic range than the D5! Something the human eye couldn't see anyway (I would imagine).

I shoot with different cameras and it drives me nuts I need different type of shutter releases for each. lol Therefore, I refuse to buy them for my backup cameras. You do not need a shutter release for shooting the Northern Lights. Just use the self timer function on your camera (I assume the D 3400 has one), set it to 2 seconds, set your camera up on a tripod, get all your settings you are going to use and press shutter and release. The camera will wait 2 seconds and then fire away. I use this function all the time since I am a big fan of dragging the shutter. Obviously, you can't use this function while taking images of moving objects (duh).


"Too noisy" is a relative term. What is too noisy to me might not be too noisy to you. Its high school volleyball, not the Super Bowl. Meaning, you'll have the ability to experiment. Shoot high ISO at F4 (or even slower) and shoot a lower ISO @ 2.8 and see how the images turn out. A correctly exposed image will have noticeably less noise then an underexposed image corrected in post.

Just a personal preference but if I was shooting 2.8 I'd use the 85mm and stick with a slower F stop when shooting with a longer lens.

DSLRs are NOT built the same way. One of the reasons pro range camera - and lens - cost more (I repeat, one of the reasons) is the build is more suited for harsher weather conditions. I would be very leery taking a mid range camera is rain, much less heavy rain. If you got away with it this one time I wouldn't press your luck and try again. I'd also break that camera down and let as much drying as I'm able before using it again. Just my 2 cents.

Shooting indoor sports is normally easier than it sounds because the lighting is very even and you normally don't have to worry about hard shadows and exposures. Because of that, I'm a big believer in shooting manual because all your exposures will be pretty even across the board, especially with shooting volleyball because a small part of the gym is being used (as compared to basketball when the whole court is used). Your settings all depend (obviously) on the amount of light (I hope its not one of those gyms with windows). Start with your ISO and go as high as you are able and feel comfortable with. From there you can adjust your F stop and shutter accordingly. Others might have a different opinion but I would shoot at the slowest F stop you can (with keeping shutter speed and the action on the court taking place in mind) because its easier to get sharper images on your subject. I know its not easy, but ALWAYS try and focus on the eyes (or at least face) when shooting people (sports are no different). Its a personal pet peeve of mine when I shoot images of people.

Post some of the images you take here so we can see them.

Shot on Saturday. Most of the leaves where gone but using a long lens at F4 I was able to blur the few remaining leaves in the background to give it a "full fall" look. I agree with what everyone is saying, in fact, I'd add i would leave that lens at home. Two lens (at least) are needed. 24-70, and something with longer reach like a 70-200. I use to leave my long lens at home and it always drive me nuts I did t bring it.

I'll be first this week. A surprised proposal that the dude starting planning in March. Under the false pretense that I was there to take a portrait of the two he popped the question. Wanted to use two different lens so I was shooting with two cameras. However, this shot was taken with a D610, Tamron 24-70 (That I just got back from repair). ISO 250, F6.3 @ 1/200 I just love this kind of stuff. Yes they are. I don't even want to know what it is costing to replace that front element!


I have learned over the years (I drop a lot of gear) that repairing Tamron and Nikon the Tamron repairs are way less expensive. I have a Nikon 24-70 that needs service (surprisingly not from a drop) and I just can't pull the trigger in sending it in for repair because I know the cost will be surprising high.

I have spares. The Tamron took over as my work horse two months ago when I got it and yes, there are times I shoot 2.8.

I just boxed it up and shipping it out (again) in the morning. [emoji591]

I buy a brand new Tamron 24-70, beautiful lens. Very first wedding using it I drop it and it breaks. Send it into Tamron. They repair and two weddings' after that I drop it again. I use it for a couple of images and right 1/3 of image is badly out of focus.

Now I have to send it in again with 5 more weddings yet this year.

One thing to remember when reading reviews of older cameras is that the rave reviews come from comparisons with what was available at the time, not what was yet to come. The consumer DSLR is still very young technology, and the improvement from generation to generation in sensor technology and signal processing is quite dramatic.
If you read reviews of the D70, you will find that they read similar to the D90 or the D7200 reviews as it was cutting edge in it's price bracket then.

! But, that is far from the right answer...As Ron said, it is a growing process and the key to that, using my earlier analogy, is to take the right step - not too big and not too small...they are all excellent cameras and each have features that one may find more desirable than another - and different people will see it the opposite way...


I came soooo close at picking up a D5 this year but just sent my camera to Nikon for repair instead. I bought another lens instead.

I still might pick one up, idk. Be kind of a waste of money though because I really don't "need" it.