krag96 hasn't added any friends yet.

But there was a time not long ago when a little old French lady owned it and you could get a fantastic steak supper there that began with hot baguettes, salad of your choice, soup, a steak that was bigger than the plate it was on, three vegetables, and desert, (if you could still get it in you) for around $25.00 USD, and that included a beer.  I miss that lady! 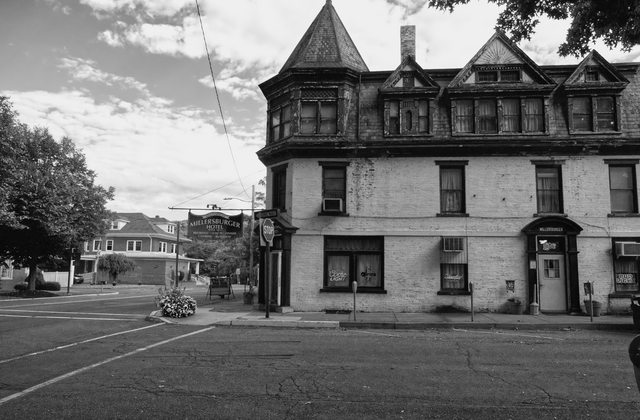 This building is 123 years old and boasts a new bronze plaque, the old one stated that Charles Dickens stayed here, (in the former hotel on this spot) during his tour of America. 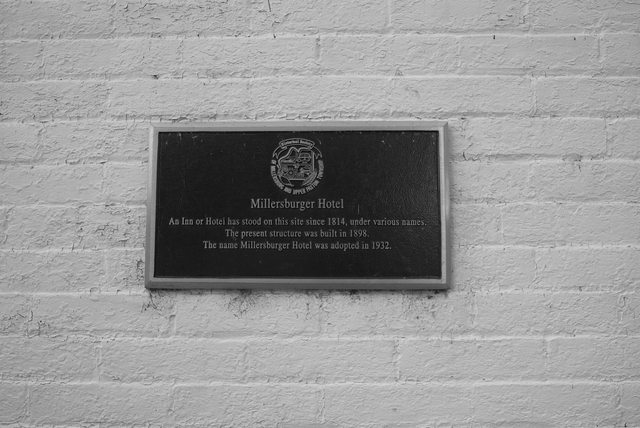 After your meal it was a good idea to take a walk in the park across the street before driving home. 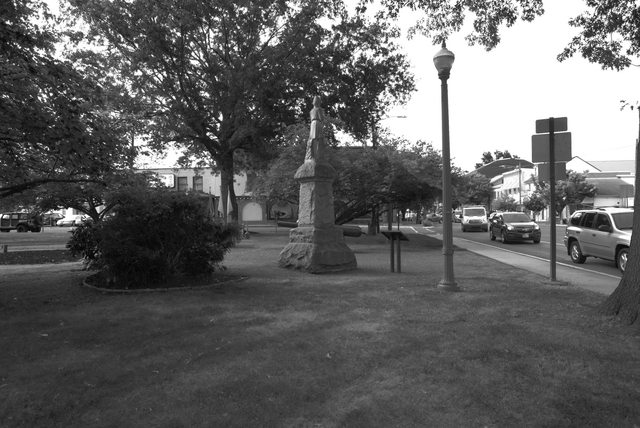 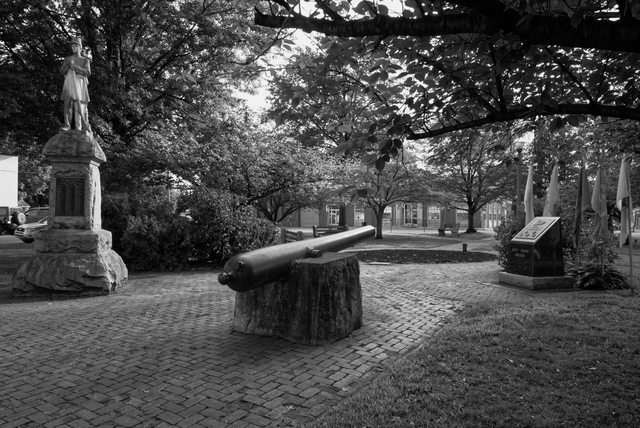 Having just gone a month shooting with my 20-35mm Nikkor f2.8 D, that's what I chose for these also.

Seems there were some very ingenus folks around 80+ years ago.  Pull the trigger-snap a photo!  Morbid?  Odd?  No-one seems to know much about it, not even who made it or why.  It originated in New York, apparently snapped at least six photos with an unloaded gun, (a Colt Police Positive Special .38 Special revolver).  Gun and camera currently resides at The National Archives of the Netherlands. 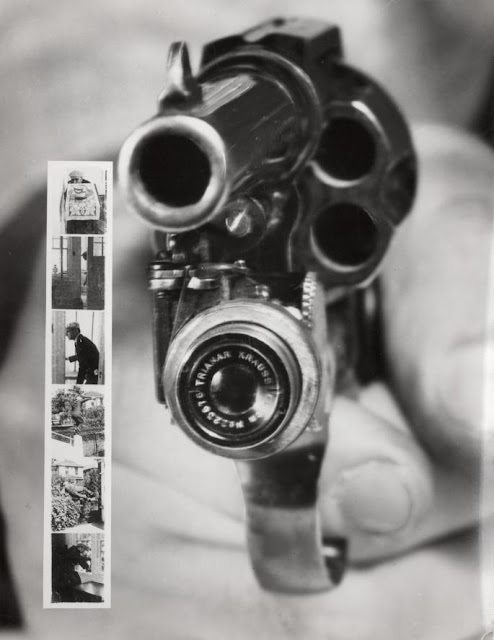 From my personal experience with firearms, I'll say it probably wasn't very successful, with live ammunition at least.  There would be movement of the gun from the trigger pull and recoil of the cartridge firing, plus a certain amount of smoke and debris from both the barrel in front of the camera, and the barrel/cylinder gap behind it.  Nor would I expect the camera in that time period  to last long with such use.

Here's a link to the article.   Colt camera revolver 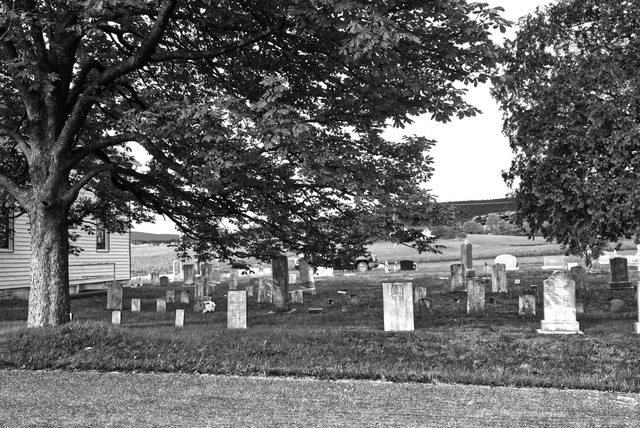 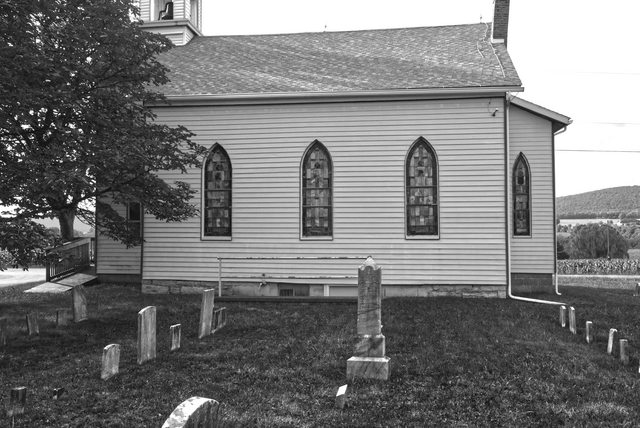 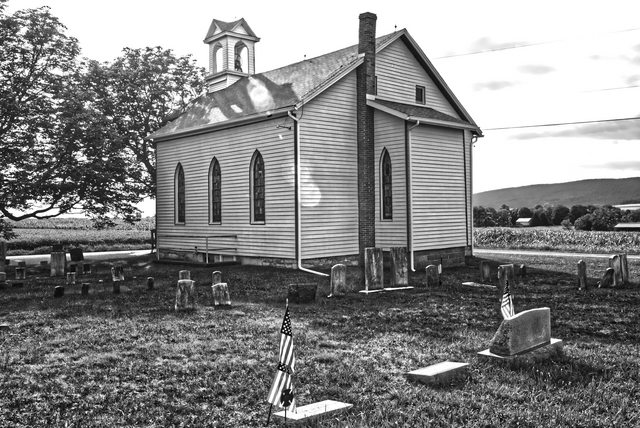 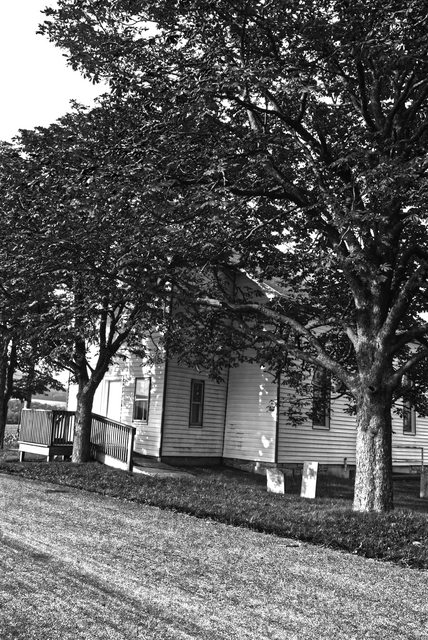 I'll pick this up again, we had some very-very good editing done last week!  I believe Peter out did himself editing the Michael Bushman farm house on the Gettysburg Battlefield.

As always your imagination is the only limit here.  Have fun!

And then the rules:

The challenge is weekly, a new thread with a new raw (preferably) or jpg fine file for each week.

Cutoff time for submissions is midnight between sunday and monday your time zone.

This is a round-robin challenge, the order of submitting the week’s raw file is based on an alphabetical list of applicants’ user names. If the next submitter on the list is unable to post at his/her turn he/she may ask the thread master to be moved down the list no later than friday morning. Late applications will be added at the bottom of the list.
We will revise this when every applicant has had a go, and perhaps change this model.

Images provided, as well as the images resulting from the challenge remain the sole property of the photographer who took them. Those participating in the editing challenge may not use or display the photo outside the challenge thread.

The owner of the photo declares a winner after the challenge is over.

As this challenge is a tool for learning and inspiration, multiple entries are not only ok, but encouraged if a participant gets a new idea for how to present or interpret the photo, including artistic interpretations.

Participants must share how they have achieved their take on the photo.

Participants are explicitly not limited as to what software is used for the challenge. 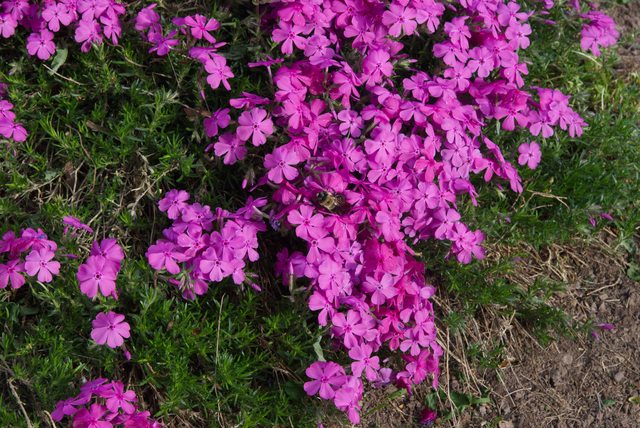 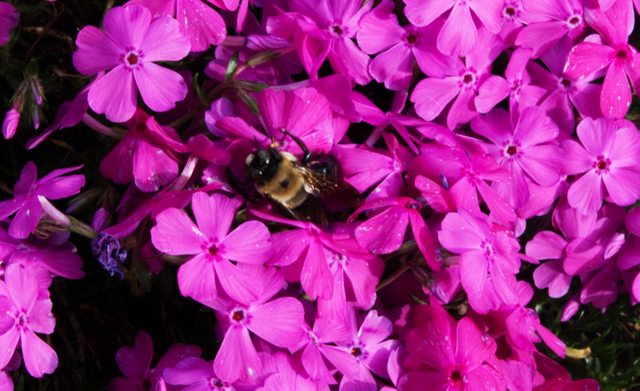 Now that I retired, I have time to add to my personal collection of American Civil War small arms.  Proposed February 1863 and put into production in March with the further improved 1864 beginning production in December of that year, the national armory at Springfield produced almost 250,000 of this model in just nine months.

Unlike the Royal Marine Artillery Rifle I previously added, this Springfield has seen plenty of combat by the looks of it, yet remains in very good condition attesting to the care it received during it's term in service. 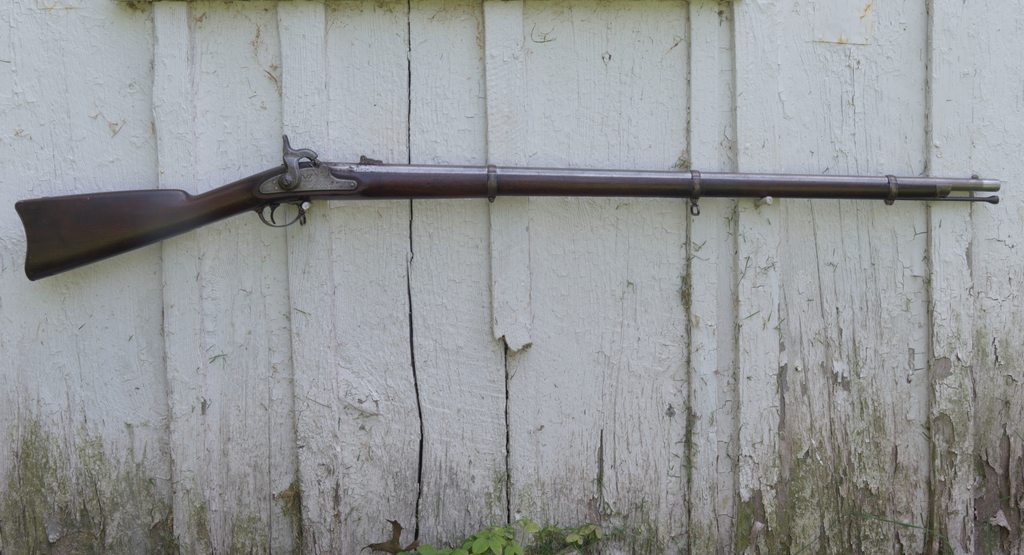 The walnut stock behind the bolster, (under the hammer arch and above the Eagle) and the bolster itself showing wear indicating the many shots it's fired.  The blast from the percussion cap/primer would wear the wood as well as the small eagle on the bolster drum away in time. 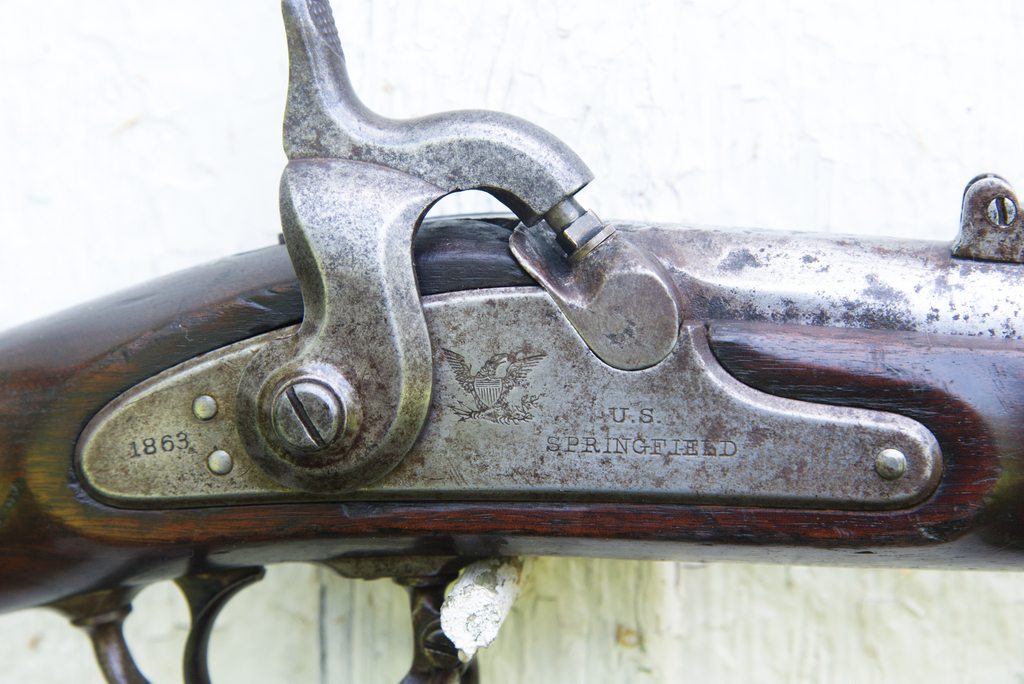 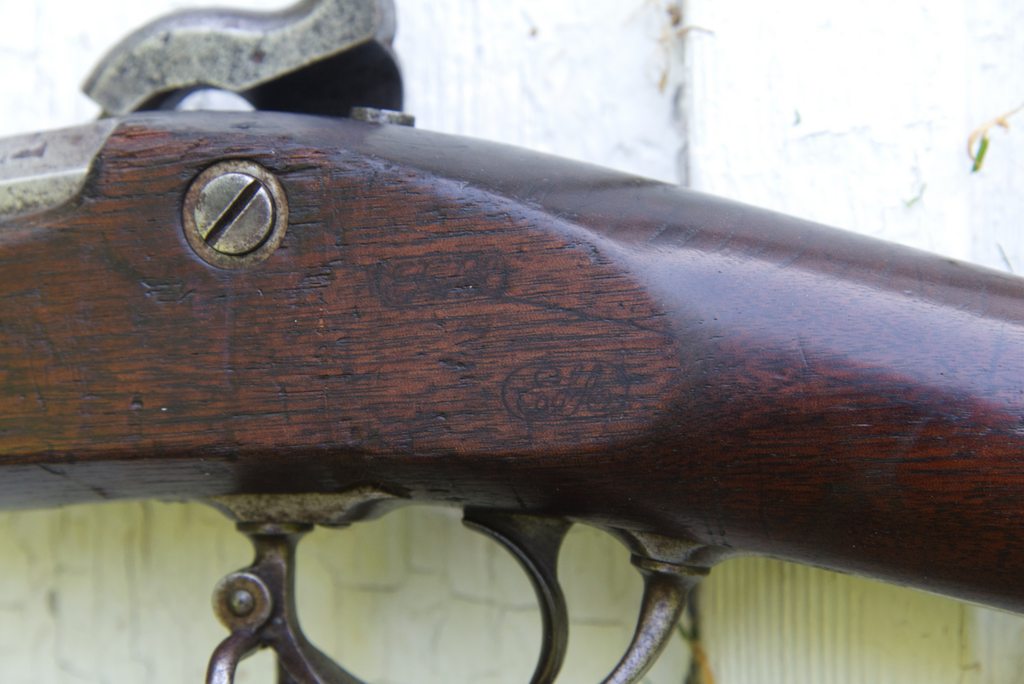 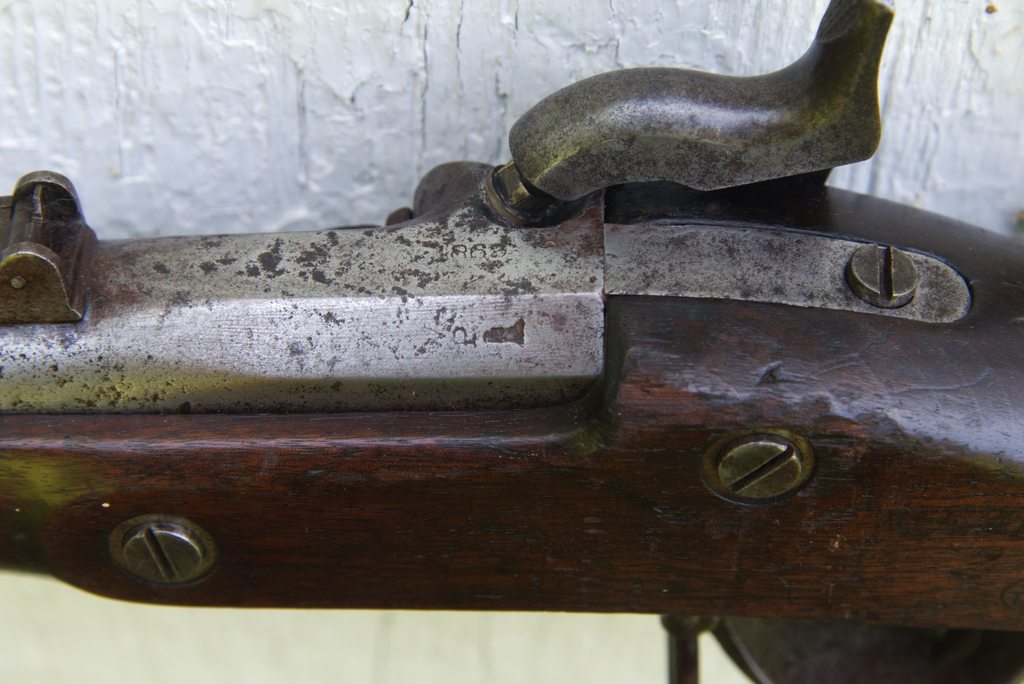 A few battle scars and normal wear from war issuance, the worst being a sliver of wood missing along the barrel channel between the upper and middle barrel bands along the left side.

All in all a very good example of a primary issue rifle that's seen the last two plus years of the war.