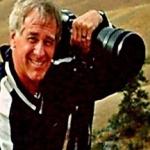 I am a semi-retired Photojournalist living & playing in sw Florida. I transplanted from Michigan in the late 70's and am loving it. I have had a great 20+ year career in my chosen field and was able to travel, meet celebrities and make many long lasting friendships. Life is good! I am also a Sailor & Ham Radio Operator.

Good point Sportz2Pix! Depending on the nature of the assignment it's about telling a story visually. Good composition is important as is relaying the emotion of the event. Often times there is not time to worry about the background, just get the shot & crop later.

The "KISS" method works for me! Know your subject, highlight it & lose what doesn't compliment it! The viewer should have no doubt as what they are seeing in in your image!

It's jammed tight. This seems to be common with this type of lens. The repair facility I normally use wants $200+ just to look at it.

Hey banjogal, I became ill a couple years ago & had to take a break from my freelance career. Believing I would not be able to return to my work, I unloaded most of my digital gear while it was still worth something. I saw what happened to film gear & could see my investment going out the window. So now I have my health issue under control (monthly infusions) & all I have left is a F100 & a D1 so I am weighing my options until I win the lottery and can buy the over priced digital wonders. therefor semi-retired! :-)

Thanks... I worked over 20-yrs in the field & was a photog in the Air Force before that. Been all over the U.S. & most of the Third-World countries in the Carribean. Started in film, switched to Digital & now getting back into film.