Another reason to go with the D810, besides the better low-light performance is the buffer size.

21 shots in 12-bit lossless is small enough to be problematic even if the pace isn't high. The 47 shot buffer makes the D810 much easier to use if you want it as a do-everything tool.

There was some speculation that there would be some internal storage when they were released, but there is none.

Referrals from Pentaxforums are quite common. Adam is the owner and sysadmin for both sites, after all.

The Metz is AWL compatible, but as you need some kind of transmitter on your camera anyway going radio link from the start makes sense. If you find the PocketWizard on the expensive side, a sender/receiver pair of Godox units is cheap and work well. They will probably not stand the abuse a PocketWizard can take in its stride but it is cheaper than a SU-800.

This post is less about whatever tripod you decide upon and more about how it behaves when the P1000 is mounted and its lens is fully extended. I own a P1000. I don't use the camera to shoot video so I bought a tripod without a ball head but which could be panned. Here are images of the P1000 mounted on the tripod.

Something was immediately apparent when the lens was fully extended. Even with the lens axis aligned over the front leg of the tripod, the shift of weight forward caused the aiming point to dip down perceptibly. One can almost see it in comparing the first two pictures. 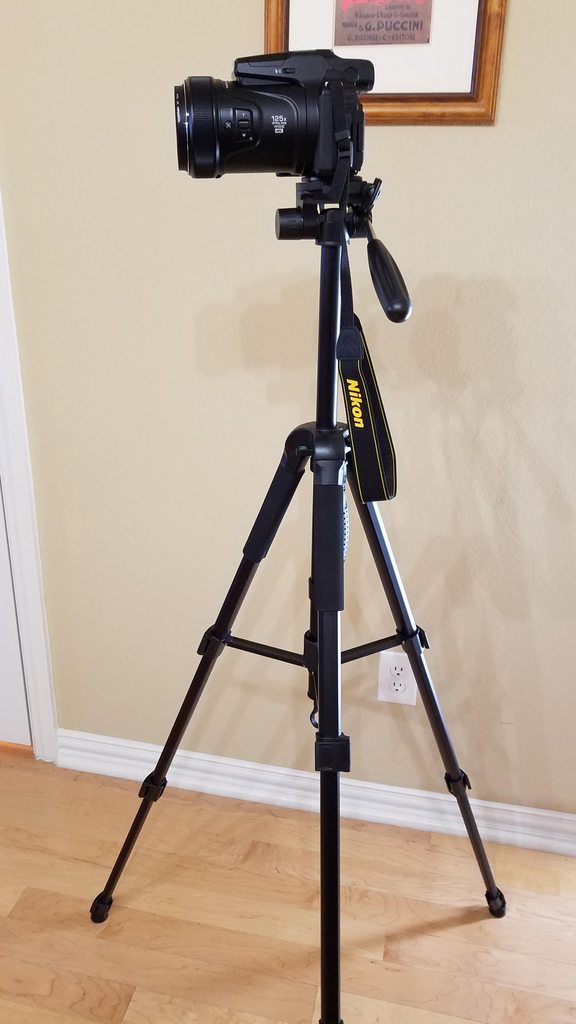 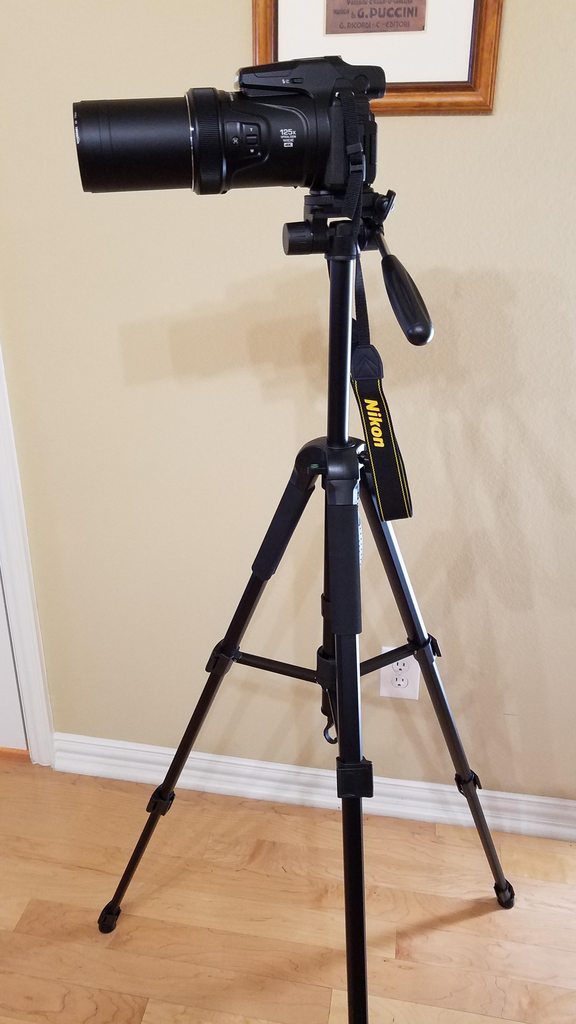 Since I couldn't find a device akin to a lens foot common to telephoto lenses, I came up with an alternative way to keep the P1000's center of gravity more closely aligned over the central axis of the tripod when the lens is fully extended. The hardware to do this is readily available.

Here's the result. FWIW, there are longer QR plates available (e.g., 150mm) if desired. This rig was also used with my Nikon D7500 in combination with my Sigma 100-400mm telephoto before I got a lens foot for the Sigma. 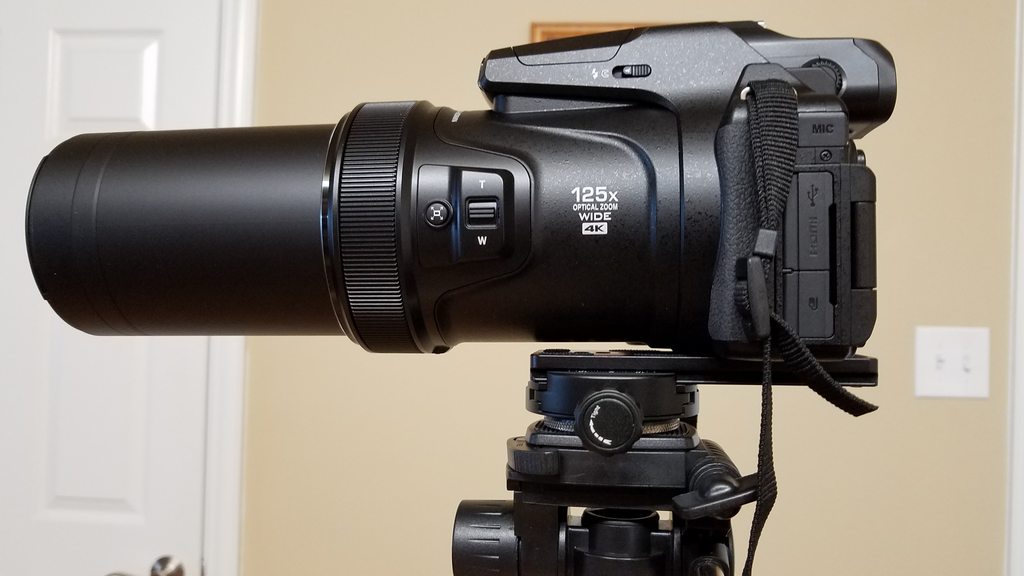 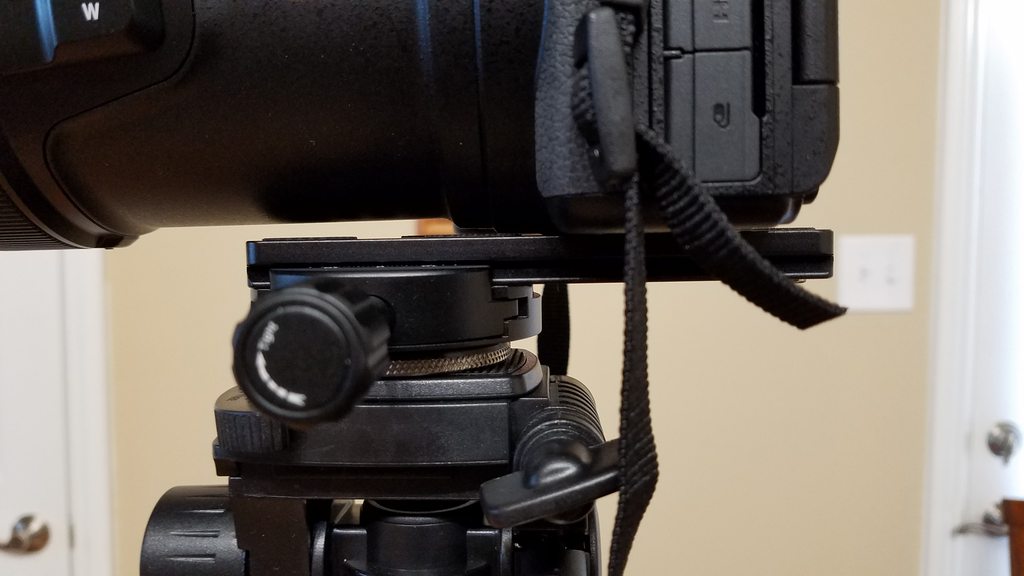 I just realized what has been bugging me when I have revisited this thread. Wouldn't this rig work better in a conventional orientation, with the arm straight back? As it is now, you have the full torsion of the extended lens on the flip axis that is made to flip the camera between landscape and portrait formats.

Photo Mechanic is geared towards a newspaper or magazine model for asset management. It is far from perfect for what you want to do but probably still the best on the market.

You can save a lot of work by using a combination of stars and colours to group photos that need similar sets of tags, put the tags into the Stationery, select the group and apply Stationery to the selected photos. If you then remove the star ratings and set a colour tag that means basic IPTC done before you deselect them, you have saved lots of tedious work. Remember that you can save Stationery sets.

As the problem went away when you cleaned the contacts, trying DeoxIT Goldwill probably work. If the Surface gold coating has some small scratches, it will tarnish quickly after an
IPA clean. The conductive protective layer left behind when the solvents have evaporated from the DeoxIT will give a much longer lasting effect.

What did you use to clean the contacts? Standard electronics cleaners or alcohol don’t give a lasting protection unlike DeOxIT Gold.
Have you checked that the contact block is screwed firmly in the lens and that the contact pins can move freely?
The changed mode is because the camera can’t read the lens CPU and thinks it is an Ai lens.

This question takes me back, Nikon haven't implemented Mass storage mode in their cameras since around 2007 or so. You need to set the camera to Mass storage somewhere in the menus to get MacOS to mount the volume. In the default PTP setting, you need an application that sets up PTP over Usb to communicate with the camera. Nikon Transfer, which is a part of ViewNX will do that if the software is working correctly.

Why stay with ViewNX 2? It is probably not compatible with 10.15 as it is abandonware. The current version is ViewNX-i. You can find the software on Nikon's support site, just like ViewNX 2.

What is your ISO when the camera misbehaves like this?

His generic charger seems to be a 2.5W unit and such a slow charge is unlikely to damage anything. There are chargers out there that can deliver 45W or more. Who knows if the camera has a current limiter built in? If your available charger gives 15W or less, you are probably safe, but if you heat damage your camera using a third-party charger the warranty will probably not cover the repair.

Welcome to the forums!
You will find that many of us have some kind of experience with Pentax as well as being Nikon users.

The current 18-300 is one of the better superzooms, but the complex optics needed to cover wide angle up into the tele range makes for lower contrast and a less sharp rendering than the AF-P 70-300. Your 18-55 together with the 70-300 will give better results than the 18-300. Only you can decide whether convenience trumps optical quality.

A quick rundown, just to make it easier for users who stumble upon this thread in the future.

E means that the lens uses an electronic activation of the the aperture (as opposed to mechanical).

Ken Rockwell's cutoff date of 2007 is dangerous as the D3 and D300 comes in under the wire using that definition, which is not the case. I think the D700 was the first introduced of the E-compatible bodies. The date of the D700 can´t be taken as a starting point as the D90, which doesn't support E-lenses, came into production a month later if I remember correctly.

What is the shutter speed set to when this happens?