36 replies to this topic

Looks like i'm jumping into this thread a bit late. I'm not too sure what i think of his work......Boring comes to mind. and I agree it's all in taste and subject to the viewer but to be honest, my little girl could take more interesting pictures than this guy.

If he's getting attention for his work....well, maybe i'm missing something.

Good luck to him though and it's great to see anyone getting recognition for their work. But I dont think I'll be looking at his website again in a hurry.

Look at all the attention this one "artist" has garnered.  He has succeeded.  If he is a true artist, money is not his motivation, rather, his work has been juried.  I would rather spend my time commenting on a true photograph, one where you can sense the photographers intent and soul, and the photograph entices you into its world.

Rob, you've just inspired me. Gonna give my little girl a camera today.

Cindy, I'm trying to determine what you mean by "so much attention" and his work being "outstanding"? I will admit, I am not seeing the majority of his work as anything special, but I do like a few of his photos. Looking also at his Instagram site, he definitely appears to be inspired by William Eggleston, who IMO, has some outstanding images, but I'm not of huge fan of most of his work. A lot of it can be considered boring, but it's also viewed by some as exceptional art.

I don't exactly see anything on his site that indicates he is garnering much attention. The three places listed on his about me page are obscure online fine art outlets, and not sources where one can say "you've made it" as a photographer if you get your work showcased there. It says his work is nationally exhibited, but that can mean anything. One of the online sites where his work is featured lists over 3,000 other photographers on their site.

You have to hand it to him that he's networking and getting his work out there, and maybe selling a few prints and books. I can't knock anyone like that, especially a fellow photographer, even if I'm not the biggest fan of his work.

He apparently got rave reviews for his portfolio at the Chicago Filter Photo event last year.  But having just graduated from art school, I can still find remnants of stigma when it comes to photography.  I was looked down upon for choosing to do photography as my senior thesis.  They no longer teach it at that school.  I see his work as trying too hard to come up with a new idea and falling flat IMHO.
But on the other hand, take a look at this photo I just shot on Saturday.  The only thing I did to it was adjust color and contrast in Photoshop.  I think it looks like a 19th century painting.  But God forbid, I was chastised relentlessly for saying that my work looks like a painting.  The professors said it was because I was embarrassed that I produced a photo instead of doing a painting.  Give me a break! 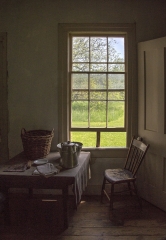 Um…can you get out of that school?

Actually I'm confused--you have graduated but you are still getting feedback from your professors?

No, I finished last year, but that is the feedback I got from them at the time.  They also seem to have this invisible division between craft and art.  Years ago they also taught weaving.  But I feel that things such as textile arts are just as artistic as a painting.  I mean look at the some of the art quilting of today or even the tapestries of lace patterns of the past.  But really, what is it that determines the value?  Why do some photos sell for millions of dollars and others for less than a hundred?  Is it really all about who you know, or good marketing?  Right now I am entering my work in contests and gallery shows.  Hopefully it will lead to something.

"Art" is subjective.  Value is relative to the person viewing it.   Beauty is in the eye of the beholder, and all that rot.

I mean this profession isn't like the others where you work toward a specific goal and there are certain steps to take to get there.  But I always say us artists are cut from a different cloth.  I don't mind though because it seems like (at least from my observation) that artists tend to be more open minded.  And for me, it sure beats being cooped up in cubical.

The simple answer to your question is really "All of the above..."  But, we're talking about a variety of things...

Thumper had it correct in that value comes down to what something is worth to someone.  I might not be willing to spend a cent on a photo, painting or other piece of art, but if someone else is willing to pay a million dollars, that is its value and the creator will make some money and it will be easier for them to sell other work.

Selling work or building a career is a combination of many things including who you know, who those people know and talk to, how well you market, who happens to be paying attention when something is released and many, many other variables.  The reality is that only a couple of those coming together at the right place and time are all that is required to sell something.  The other side of that reality is that it rarely happens on a scale that has significant impact on the artist's economic status or career.

As an example, over 10 years ago, I paid about $150 for a framed 8x10 sports photo taken by some photographer I don't know and don't care about.  I bought the photo for two reasons.  It was at a charity auction where lots of that money went to the charity and it was a photo I liked of a player I respected.  I would never have purchased it - even autographed - for that price had I seen it in one of those sports memorabilia stores and I probably wouldn't have ever seen it.  I just don't look for those things.  So, a combination of things happened that got that photographer a sale (assuming they hadn't sold the rights to the photo) but I don't think it it had any significant impact on their wallet or their career.

Like that photographer, I'm more the photojournalist rather than an artistic photographer.  That is also an example of why I decided to take a different career path.  In any form of art - and I am including photojournalism in that - it is very hard to stand out from the crowd.

)  I enjoy photography so much because there's so much "science" in the making of the art but when it comes to the "art" part, I'm pretty much "I see what I see and I like what I see so let me record this for posterity in the most memorable way!"

All I can say is Andy Warhol made a fortune publishing that kinda stuff..

I say be yourself and nurture your own style - let others be themselves... whoever they are.

Just having a look at his web site, I'd say it's about social comment. He's trying to tell a story about certain ways of life in America. My guess is he's tapped into social group or genre that some people get.

Ok, so why is this kind of thing dominating fine art photography?  Isn't this the kind of thing that should be in journalistic media instead of hanging on the walls of a gallery?  At what point did storytelling become high art?  Why do we no longer see spectacular landscapes, or beautiful botanicals in art galleries? I just like photography that is beautiful.  I enjoy the photography I am seeing on 1x.com

"Horses for courses" I guess Cindy. Like I said before, photographers like this, are tapping into some social seam in your neck of the woods. As for the photojournalist verses artistic debate. Personally I feel both are art forms. All art is subjective and should challenge our thoughts and perceptions. Photography should show our world at its finest and at its worst.

Back to Photographic Technique · Next Unread Topic →