Do I have to get an FX just for the viewfinder?

11 replies to this topic

I'm needing to upgrade from my D70 as it had an unfortunate meeting with a concrete floor. The floor is doing ok, thanks. Not the camera.

In my work as a furniture maker and visual artist I have a need for a reasonable camera but I don't need and can't afford the top of the range. One thing I did miss when moving on from film to the D70 was the larger size of the image through the viewfinder - it was such a better experience than the tiny rectangle in the D70. My question: is the only way to get this larger view  by using an FX camera? Or do the later DX cameras now have an enlarged  viewfinder view, more like a 35mm film SLR? If not, I will have to look for a used FX body - a large screen display doesn't do it for me!

Second question: I bought a Nikon SLR film camera for the lens which I put on the D70. It's an AF Nikkor 35-70mm. It worked ok on the D70 - I'm assuming it would be compatible with a full-frame body?

If you knowledgable people out there can give me some advice I'd appreciate it as I'm not up with the play. I do know how to use a film camera, love the simplicity of them, and used to print my own prints. I dislike too many bells and whistles of the digital age, but need "a reasonable" functioning camera which I will buy second hand. Any recommendations appreciated!

The viewfinder in modern DX bodies are quite a bit better than in the D70/D100 generation, they are, however, not equal to the high eye point finders in the F3, F4, F90, F100 or F5. They are more comparable to the finder in the F70 and similar enthusiast SLR-s. If the finder quality is important to you, keep away from the pentamirrors that are used instead of real pentaprisms in the D3xxx and D5xxx ranges.

If you are looking for a body that has really good ergonomics, a used D700 is probably the best you can find on a low budget.

Thanks Merco, good information. I'm trying to place the D700 into context of the family. Are the D600 (much loved in reviews on here), the D750 (higher pixel rating) and the D800 comparable? Of those, there is at present only a D800 for sale on the New Zealand online auction site. The D600 seems to have higher specs and cost than the D700, although both introduced at the same time, and one would expect the higher number to have higher specs? Would the cost difference be because of the added pixels and video capability?

Would the D750 as described on the camera database be better than the D700, or are there downsides to the higher specs, such as higher cost second hand, more complex ergonomics? What about the D800?

I appreciate your comments regarding ergonomics actually, as you've noticed from my post that I value good ergonomics highly.

One more thing, why are the D4, D5 etc cameras bigger at the base - is this a larger batter pack? If it was a film camera it might be a motor drive...

Sorry to bombard you, but thanks if you can illuminate me.

The D700 is a D3, but without the built-in vertical grip. It was introduced in July 2008, The D600 wasn’t introduced until September 2012 and is ergonomically derived from the D7000 DX camera.

The D700 can, with the optional MB-D10 vertical grip use the same three-cell battery as the D3 family as well as the native two-cell. This boosts the performance in the CH mode. This boost with a vertical grip is unique to the small pro bodies, that is the D300, D500, D700 and D8x0.

It is getting old, but it has never been replaced in the line-up as Nikon won’t take the risk of building a cheaper body that is as close to the performance of the current flagship again.

That said, a D800 is a good camera if the small buffer size isn’t a problem for your use.

The D6x0 and D750 aren’t as flexible when it comes to what controls can be assigned to what buttons as the D700 or D8x0 bodies, but are comfortable to use with a grip. I need the grip on my D750 as the bottom corner lies on a nerve cluster without it.

Peter is correct about the D700, they're fantastic machines and everything is just where it belongs an easy to use.  I have two of them, both with converted battery grips to use the larger three cell battery.  They Have gone up in price since I bought my second one, (they're back in demand I suppose).  They're built like a tank also, you won't see that kind of quality for the price again.   No silly gadgets on them like, ''scenes'' or ''effects'', they're just a solid quality machine.

OK, trying to get my head around all that. The D600 is an Fx development from the D300s, a Dx camera, and not regarded as a pro body? What are your comments about that camera, and is it relatively cheaper second hand because it had problems with the sensor (which Nikon replace for free)?

The D800 developed from the D700, and I'm assuming that the buffering time you mention Peter is due to the larger pixel count.

The D750 is a development from the D810, which I'm assuming is a development of the D800. So, not directly a close relative of the D700? It probably won't affect me that I can't re-assign the functions.

The lower pixel count of the D700 doesn't worry me, but I would like video capability.

So, if I haven't taxed your patience yet...

Let’s see of I can lessen the confusion a bit.
The D600, D610, D750 and D780 are all in the enthusiast range of bodies. They are all descended from the D7000 DX body. They are not as well weather-sealed as the professional bodies and a bit more menu-driven as they simply don’t have the buttons available.

The D700, D800, D800E, D810 and D850 are in the professional range and are ergonomically similar to the single-digit models but without the built-in vertical grip or the voice-memo feature. Even since the D800, they have had the highest resolution available at the time, rather than having the same sensor as the flagship body like the D700 had. The later bodies in this class aren’t as tank-like as the D700, but neither are the D4 onwards…

Thanks Peter, it's looking like I'll be going for the D600, 610, 750, 780 range as I would like video capability wich the D700 doesn't have, and my budget probably won't stretch to the D800 or later pro models - although, from what you say, I think I would probably prefer the controls on those models.

If I can just clarify your earlier remarks about DX viewfinders having improved - but does the image appear bigger, as it does for instance with a run of the mill 35mm SLR? Or is it still small as on my D70?

The feeling of looking through a tunnel is history but the finder is more like the F70 than the HP finders in the F801 upwards film bodies. I have no problem switching between a D7200 and a D750 at the same gig.

I have two of them, both with converted battery grips to use the larger three cell battery.

What do you mean by "converted battery grip"?  Am I able to convert the grip on my D7200 to take 2 batteries, instead of one in the grip and one in the camera body?

What do you mean by "converted battery grip"?  Am I able to convert the grip on my D7200 to take 2 batteries, instead of one in the grip and one in the camera body?


The MB-D10 takes the same EN-EL3e battery as the D700 or a set of AA cells as standard. It can, however, be converted to use an EN-EL4a battery by buying a battery lid.

Thanks Peter, it's looking like I'll be going for the D600, 610, 750, 780 range as I would like video capability wich the D700 doesn't have, and my budget probably won't stretch to the D800 or later pro models - although, from what you say, I think I would probably prefer the controls on those models.

If I can just clarify your earlier remarks about DX viewfinders having improved - but does the image appear bigger, as it does for instance with a run of the mill 35mm SLR? Or is it still small as on my D70?

When I wanted something with more dynamic range than my D700 offered, I looked at all the above carefully, and for months before choosing a D750.  Video is something I don't consider, I don't use it, I bought it for it's low light capabilities and it's well rounded features.  Even though I prefer to use a D700, I find myself using the D750 at least as much.  It's probably Nikon's best over-all DSLR for the money.  I much prefer to use a D700-D3s-D800 series, but at the end of the day the D750 just does it's job well.

I recently photographed several original Civil War muskets in detail, a lot of shots, some macro.  I set the D750 on AUTO with a Tamron 90mm f2.8 AF Macro lens and got through some 250 shots, (over three days) without tiring of it.  It would have taken quite a bit longer with one of the D700's!

Here are two photos that look unimpressive, but maybe not possible with a camera of lesser dynamic range.  Taken on the Gettysburg Battlefield this April with the D750.  The building is the Brian house which stood on the right of ''Pickett's Charge'' July 3, 1863.  The fighting took place within 20m of the front door.  It's locked and the only way to get a photos of the interior was through the windows, and on a bright day outside.

As you can see, fingerprints on the glass, spider web, and a crack.  I put the lens right against the glass and shot.  The lens is an old Nikkor 20-35mm f2.8 D 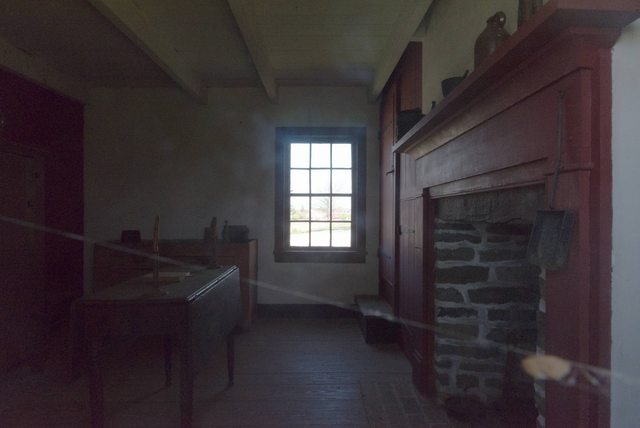 This window was a little cleaner. 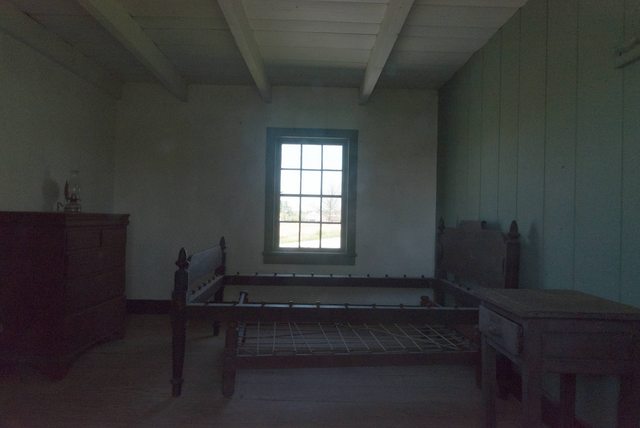 The exterior and the two windows I shot through.  The monument of the soldier was the Union firing position which extended into the field in the near distance beyond the curve in the road. 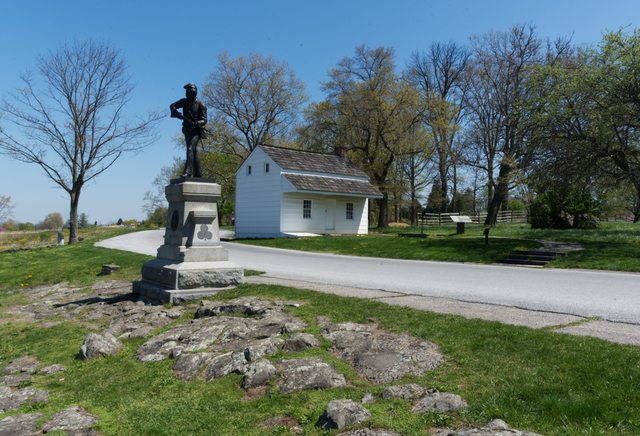 I would say the D750 is a very capable.  It's not the Pro level tanks the D3s-D700-D800 are, but I believe it to be more flexible with it's dynamic range, tilting screen, and up-dated processor, one of the most well rounded DSLR's in it's price range.  I have mine set up to mimic my D700's close enough that I get bye although I would still rather shoot with a D700 controls.

You know what you need better than I do.  If it's within your price range, I think a gently used D750 will do what you want and more.

Back to Beginner Questions · Next Unread Topic →

Also tagged with one or more of these keywords: viewfinder