13 replies to this topic

Does anyone have any theories?

Let's get a discussion going.

That is a nice history of the Hollywood aspect ratios, but why did Barnack end up using the 3:2 ratio we still use today?

The cinema industry, if I remember well, already had a 35 mm film
which was 24:18 (3:2) horizontal frames when the roll was vertical
on the cameras and projectors.

For the photo camera, where the film was passing horizontally, he
design the 36:24 (3:2) horizontal frames, New higher quality lenses
had to be developed since the cinema lenses were 1, too small  to
cover the new size and 2, photos needed better IQ (image quality).

I did not remember that the name was Barnack!

… but you knew all that!

Oscar Barnack was the engineer at Leitz who was the mind behind the 35 mm camera.

The Edison patent format was, as you say 24:18. This is 4:3. Oscar Barnack found it easiest to double the length of the format and advance the film 8 sprockets instead of the cine 4 sprocket frame. That is the technical reason behind the 24x36 mm format.

There was a marketing reason as well. Here, Kodak were responsible, long before these miniature cameras were thought of.

Let's see if somebody has a theory...

It matches the classic 35mm format is all I can think of, (what most people had come to expect their photos to look like).

It matches the classic 35mm format is all I can think of, (what most people had come to expect their photos to look like).


If you think further back in history, why did they decide on 24x36mm? The technical reason is easy to understand, but there were other factors.

I have found the reasons behind this format interesting for many years and have read quite a bit about it. I even used slide masks to get a 5:4 aspect ratio on slide film as I found it difficult to compose for 3:2 back in the analog days.

I would think it was the wider horizontal view, or you could get a good portrait by turning the camera 90 degrees.

The problem with 3:2 is that it seldom, if ever, occurs in nature. There is a reason why paintings are seldom 3:2. It is either too oblong or not oblong enough.

Large format negs are usually either 5:4 or some kind of panoramic format and professional medium format 6x4.5, 6x6 or 6x7.

3:2 before 35 mm was mostly snapshot cameras like the box brownie and the folders. The reason for the 6x9 format was probably that you got 8 frames from the same roll film as the 12 frame square format Kodak A without anything extra going to waste.

I think that the familiarity with the format from using the box brownies made it easier to accept the small cameras, even if they were expensive.

I'm not sure if this was cropped or not, but was taken with an old bellows folding Kodak.  I prefer 5:4 myself. 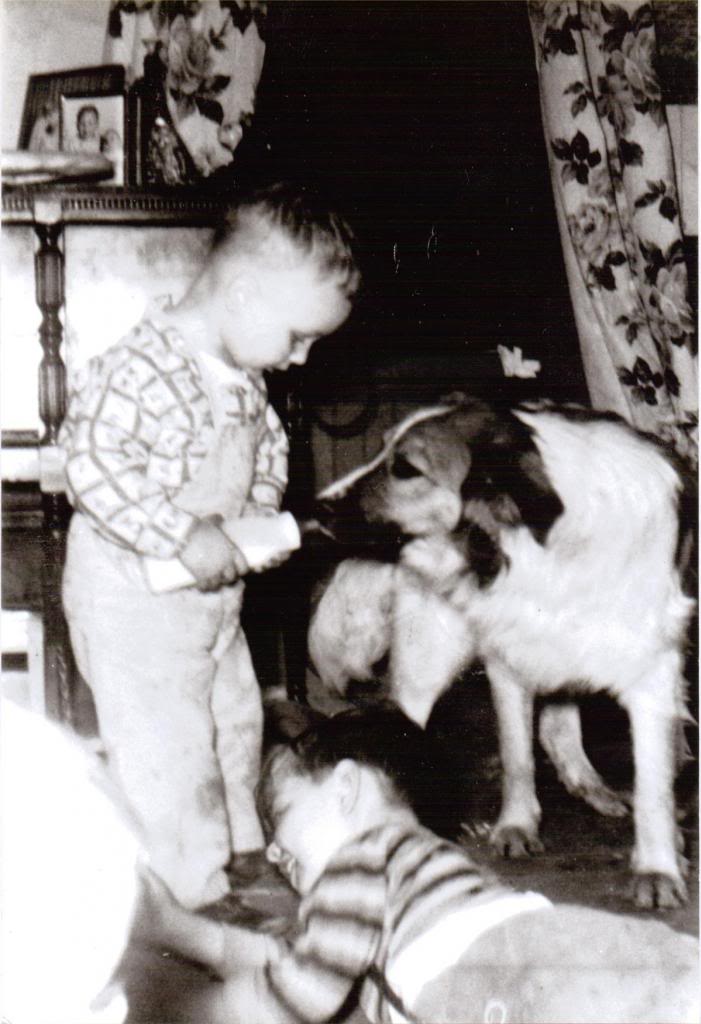 Yes, that's me feeding the dog my little brother's bottle, (I always prefer dogs to people) probably 1951-52.  My older cousin on the floor, my brother probably went crying to mom about the bottle, (little snitch!) and apparently she found it amusing, (if only she brought her sense of humor into some of the stuff I would do later...).  I've been 9 years in ''semi retirement'' and been working more than when I did before!  That ends in April when my FFL expires.  I'm closing the shop, selling almost everything and going to the hills of West Virginia to enjoy what ever time I got left.

Here's something you fellows may not have seen before.  They're called, ''Sweetheart" grips from WWII.  ''Trench Art'' done mostly by air crews using a photo from home laminated under plexiglass from damaged aircraft. 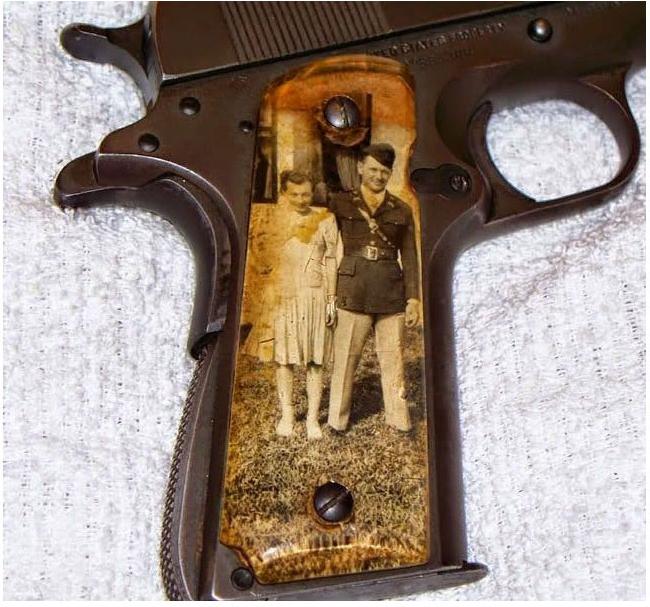 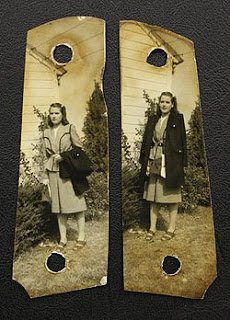 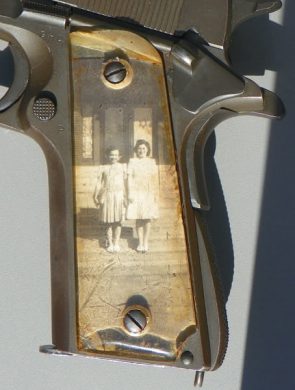 Me too but only for vertical frames.

Here's something you fellows may not have seen before.  They're called, ''Sweetheart" grips from WWII.  ''Trench Art'' done mostly by air crews using a photo from home laminated under plexiglass from damaged aircraft.

I learn something new every day, it seems. I'm a fan of 1911s but I'd never heard about this. A quick search turned up this site among others.

I regret seeing the disappearance of any FFL, especially these days. As someone who is already retired, though, I wish you an enjoyable, long, and satisfying retirement.

Thanks, bluzman!  Nine years ago I closed the shop to the public and since only do work for a few local shops who do mostly just retail selling.  47 years of being chained to a bench, mill, and lathe are enough, there's a younger smith with a good reputation an hour away who does the same work I do and would appreciate the work and he's a good guy.

I was mentored by WWII Vets and you wouldn't believe some of the stuff they came up with when they had any idle time.

Better keep on track here, if I buy another camera, I want it to have 5:4 as well as 3:2.  Of course I can crop and print what I like with Affinity...

Interesting, now you've got me wanting to compare image ratio in modern cameras to what some works of the Renaissance Masters chose for some of their paintings.

Back to Coffee Chat · Next Unread Topic →