3 replies to this topic

Thank you for accepting me into the Nikon Forums. Way back when, I bought a Nikon EM which I loved. I could play with shutter speeds, lens, filter, etc. Someone else liked it too as they stole it. That got replaced by another Nikon Film SLR which I used for years until someone, who shall remain nameless, dropped the camera causing multiple internals to break. My current Nikon is a Coolpix P500. My wife has a Coolpix S7000 and somewhere in our house is another compact Nikon. Personally I don't think any of them can compare to my first EM.

Welcome to the forums. Please let us see what you can do with your Coolpix.

Personally I don't think any of them can compare to my first EM.

That has to do with the first love bias!

I'm a retired photographer, did this as a second career after 20 years active duty in the AF.  I've worked with Nikkormats when getting started, moved up to Nikon Fs, had an F2, sent my event guys out with Nikon EMs cause they were uncomplicated to use.  When I took a position as a civilian staff phtographer at Goodfellow AFB they had us working with Nikon F3s.  We also had medium format, a 4x5 view camera mainly for officer portraits (required in their records at that time and had major impact on their promotion potential).

For personal gear I had changed over to a pair of EOS 650s (the first EOS model) due  to their light weight and very consistent exposure quality.

Then came the changeover to all digital with modified Nikon film cameras to a 1.5MP format at work.

When I retired, I took a 4 year break from photography before jumping back in at a personal level, joined the Concho Valley Photography Club and have supported that group up to the present.  I've been using Panasonic Lumix cameras due to the lead they had in video and motion picture function.

Looking at possibly getting back into Nikon.  I've picked up 3 Rokinon Cine DS lenses in Nikon F mount and they work fantastic on a friend's Nikon D750 so I may be looking for an affordable used one or I may go the Nikon Z6 route.

Here is an example of what some of my studio work used to look like.  Shot with a Mamiya RB-67, Mamiya Sekor 150mm Soft Focus lens, this file scanned from a 4x5 print. 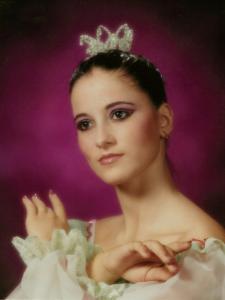 Back to Say Hello! · Next Unread Topic →