I was recently given an old Nikon F65 which had an inoperative shutter button - ie nothing happened with either a light or heavy press.

After taking the camera apart I found that the problem was that the internal lubrication in the shutter release button has solidified into a jell making the switch inoperative.

In the enclosed photo the jell is the blue material on the upper contact bar of the switch - its this part  of the switch which is used to sense the light touch on the shutter release and it seems that if this it not sensed then the full pressure on the button (which uses the lower contacts) is ignored.

After removing the jell and rebuilding the camera it now works (except that the flash does not pop up when it should); if anyone has any suggestions regarding why I would be grateful for the information.

The photo of the inside of the offending switch was taken by holding my Samsung S8 to the eyepiece of my microscope ! 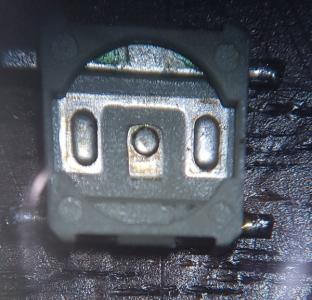 ADDED LATER: The problem with the flash was that I had not resoldered the wires to the flash opening relay !  Everything now works as it should.

Back to Nikon Film SLRs · Next Unread Topic →

Also tagged with one or more of these keywords: nikon f65, shutter release