7 replies to this topic

There's a more or less unique photo op coming up - the 100th anniversary of the Royal Air Force on July 10th, which will include a 100-aircraft flypast over central London. There's also going to be a parade at Buckingham Palace but you're unlikely to be able to get near it if you're not present or former RAF personnel.

I will have to find a good vantage point for this - I didn't see as much as I would have liked for the Queen's birthday earlier this month, too many tall trees near my house, though I did get this, the Battle of Britain commemorative flight: 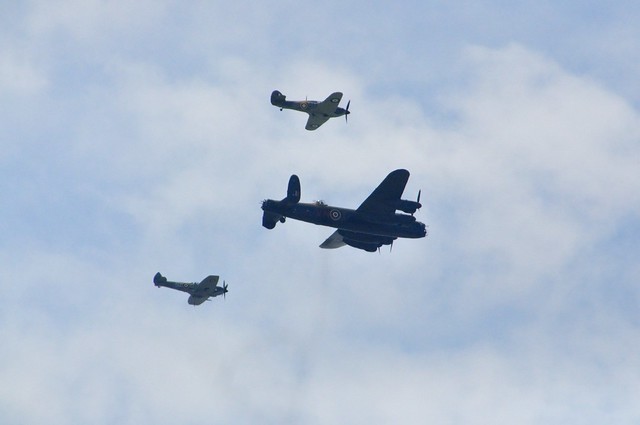 Sorry, forgot to link to my photos from this event

Thanks very much for such a wonderful series of your country's aircraft used during WWII.  There is one aircraft that I am not sure of and that is the one with the stripes on both wings and also on the rear of the fuselage.  I want to say it is a Havilland, however I am not totally sure.  Have any info on that one?

Again, Many thanks for a terrific tour of the very impressive formations.

Ah, okay I see what you are saying.  Quite an impressive display.  I find one issue interesting and that is the WWI ended in 1918 and we all know that the British had fighters then, so at that time the RAF must have had a different name, unless of course it was named the RAF just prior to the end of the war.

Thanks very much for clearing that up, Peter.

It was the RFC, the army's Royal Flying Corps, and the Navy's RNAS, Royal Navy Air Service, for most of WW1. They merged and became a separate service on 1st April 1918.


The working conditions and position force

you to silhouette renditions!

Pretty much - I think people in the taller buildings might have had a better view, but I didn't have access.

Back to Meet-Ups and Events · Next Unread Topic →